Besides Chinatowm neighborhood, Sol Heng Tai villa is also an ideal destination of Bangkok for those who love ancient Chinese style.

It is known that this house was built before 'Bangkok', specifically in the 1800s (late Ayuthaya period), Phra Aphaiwanit - a merchant emerging from the silk and dry goods trade from China, belonging to the Sol family Rich and the last to join the nobility under King Rama III, moved to Siam (now Talat Noi) and built a villa here to live.

Later, the Sol Heng Tai villa was continuously the residence of his descendants - famous Thai businessmen, celebrities and politicians, including Korn Chatikavanij.

It is one of the last remaining traditional Chinese houses in Bangkok and is considered the oldest private residence in the city with a lifespan of up to 220 years. Therefore, a Chinese tycoon in Thailand is said to have offered to buy the mansion for 2 billion baht but was rejected by his family.

Starting in 2014, this Chinese-style old house was opened to the public to visit and has become an attractive tourist attraction in Bangkok for lovers of ancient Chinese architecture next to the busy Chinatown .

Sol Heng Tai residence was built based on the characteristics of Chinese feng shui principles, specifically the Chaozhou Hokkien architecture consisting of four level 4 houses surrounding a large courtyard in the middle. However, there is still a mix with the Thai construction style, which is a house on stilts, so it looks like a 2-storey building.

The first impression of visitors is the red gong with prominent gold-plated Chinese characters in the middle of the gate. On the wall are carved pictures of mountains, rivers, fairies or animals and flowers represented by God, extremely sophisticated and eye-catching. 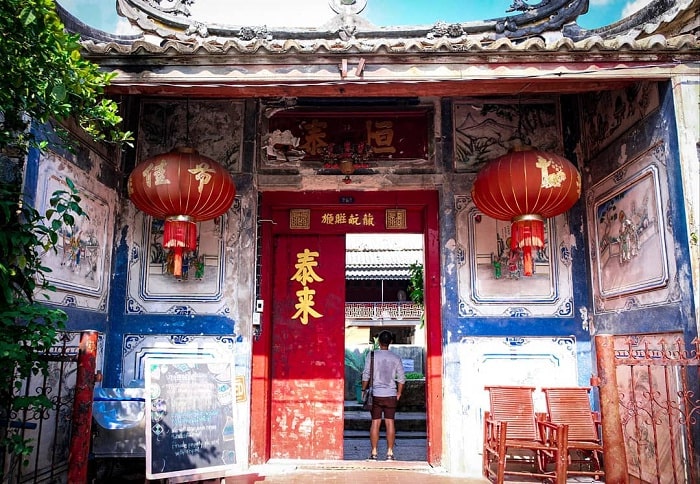 The entrance to the mansion (Photo @bom_bs)

The architectural works inside Sol Heng Tai villa are built mainly of thick, wide teak wood and connected by a wedge. The special thing is that even though it has been built for a long time, important structures such as columns, walls, roofs and beams are still quite strong, with only slight decay in a few locations. The scene inside the four chambers (Photo @nextstepzone)

Around the yard, there are many trees planted, typically a jujube tree with branches to create shade for everyone living in the house as well as to make the space more airy and fresh. 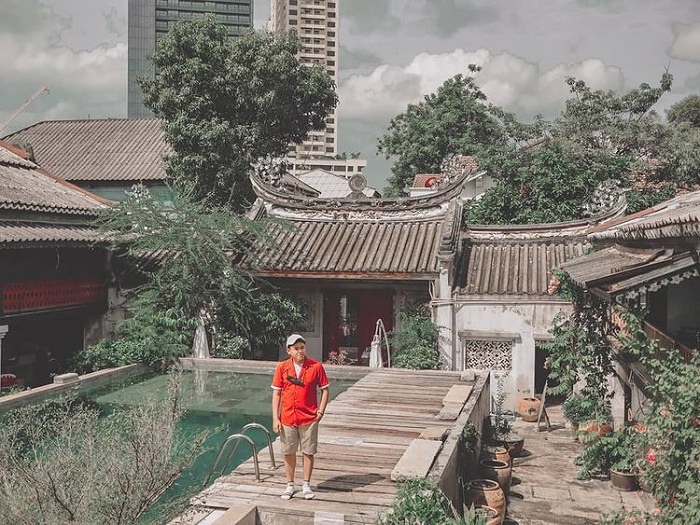 However, the most impressive thing about Sol Heng Tai villa is probably the swimming pool located in the center of the courtyard with a wall made of solid granite with crystal clear turquoise water and luxurious design like professional swimming pools. industry, making anyone who comes here cannot ignore. 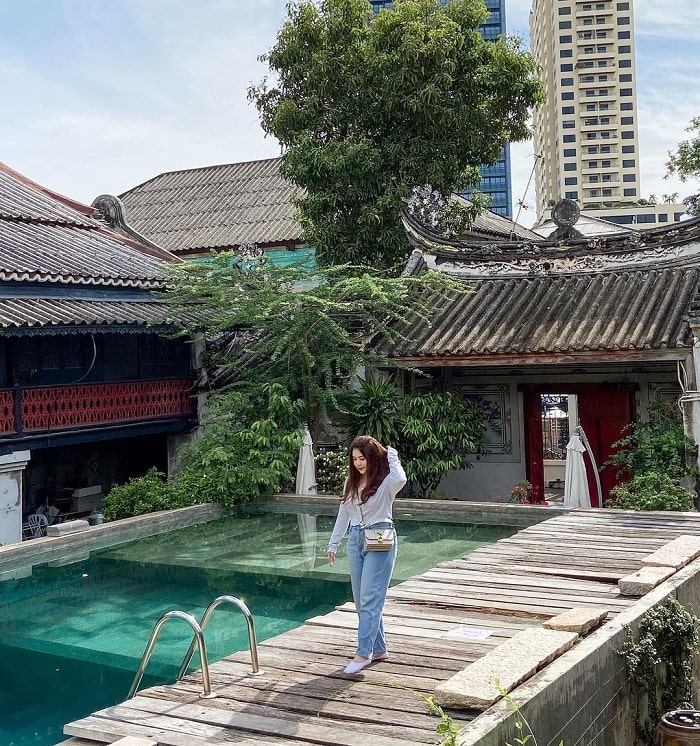 Modern swimming pool in the middle of the house (Photo @mainps_)

In the midst of an ancient space, a modern feature suddenly appeared but there was no "out of place" but surprisingly harmonious, and at the same time made the atmosphere in the house more comfortable and cooler.

Located in the middle of a luxurious modern Bangkok, when entering the courtyard of Po Seng Pier villa, you will feel like you are stepping through the door of time to the ancient space full of ancient mandarins.

Moreover, even though it's old, there are still people living so you won't feel like entering a stocky, rigid museum. 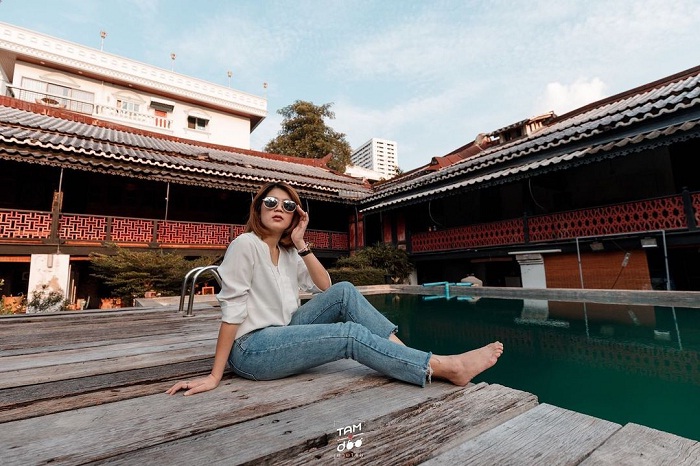 In particular, the mansion has something that you won't find in the alleys of Bangkok's Chinatown is a world-class diving center with a deep courtyard pool, scuba tanks and skilled workers. Professional diving.

If you already know how to swim, you can experience the cool feeling under the water to dispel the sweltering heat of summer at the "fire pan" in Bangkok, but for those of you who don't know how to swim, you don't have to worry because you can completely catch up. early study. The teachers will guide you extremely detailed and dedicated always. There is a professional swimming class (Photo @jummie08)

Besides, distinctive villa Sol Heng Tai owns over a considerable number of eagles purebred and operates a kennel breeding downstairs, so if curious, you can explore to try offline.

Oh, don't forget to take pictures of the virtual life, because the ancient Chinese scenery will not be easy to find in the heart of Bangkok. Especially buying another set of cheongsam is "awesome cat".

Revealing the angle of "thousands of likes" for you are: a wooden chair next to the entrance with an eye-catching red lantern, a clear blue swimming pool in the middle of the yard, a striking red railing with sophisticated patterns or a long corridor. sucking deep… 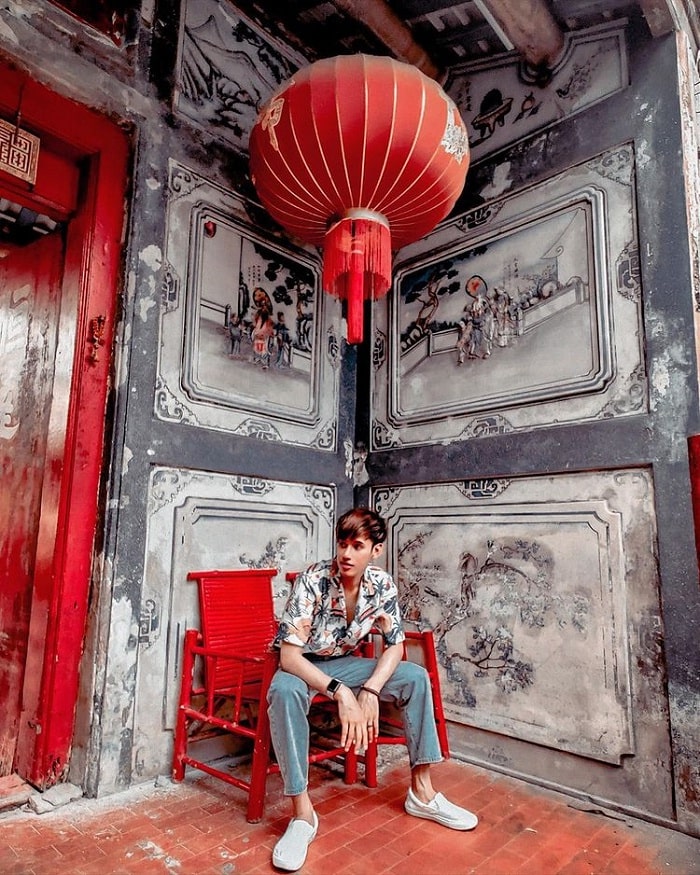 In addition, after a lifetime of sightseeing, a small-scale coffee shop in the corridor on the first floor will be an ideal choice to relax for you. There's nothing better than sipping a glass of cold water while enjoying the view. 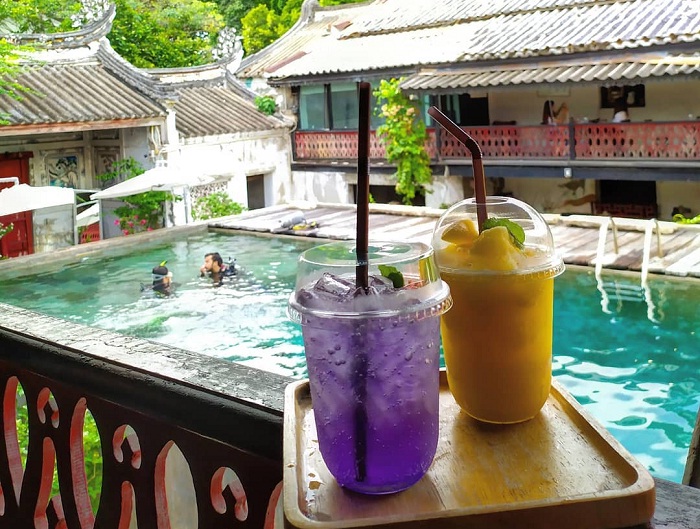 How to get there : the entrance to the mansion is hidden deep in the narrow alleys so it's a bit difficult to find. So the easiest way is to go to Soi Wanit 2 - one of the busiest streets of Talad Noi and look for a street called Soi Duang Tawan to find signs that lead to River View Guesthouse. Walk until you find a giant tree trunk on the left, then turn in and go straight past the abandoned orange bug car on the side of the road to see the colorful entrance of the building on the left hand side. Please.

It can be said that Sol Heng Tai villa is a hundred-year-old Chinese gem in the heart of Bangkok that visitors should not miss.